SHOULD DRAGONS BE TAMED, OR SHOULD HYPATIA RECEIVE AN APOLOGY?

After the imagery, symbols and spatial aspects of buildings and religions of old times, I should show how that spatial strategy of devaluating the feminine principle by demoting it to a lower level, from Heaven to Earth influence our realities today, following all the revolutions, emancipation and talk about gender equality of XX century. Of what importance are medieval religious values, meek and humble Madonnas and Theotokos with no personality in a secularized world? After all, now women have full access to education, jobs, political life, they can be CEOs, Prime Ministers, college professors, scientists... they have all the same rights as men, don’t they?

The Study on violence against women in Europe conducted by The European Union Agency for Fundamental Rights (FRA) still finds that one in three women in Europe is a victim of violence. At the time I was writing this article, the European Parliament has rejected a Report on gender equality that recommended a wide range of measures to tackle inequality between men and women in the EU. The very open –minded Pope Francis sometimes accused to be a radical leftist for his liberal standings, has a serious problem to find a place for women within the church that has no other feminine role model than that of inequality, submissiveness and self-renouncement. In his words “demands that the legitimate rights of women be respected, based on the firm conviction that men and women are equal in dignity, present the Church with profound and challenging questions which cannot be lightly evaded.” Orthodoxia, discussing the role of women still thinks about feminine roles in terms of “Holy Mothers”. And here I have to say that the Protestant worldview does not include even that restricted image of feminine in any capacity.

Many things could be, and are already said and written on the issue of gender equality, both pro and contra, but I did not start this article to advocate equal pay or equal political rights, or any of gender issues discussed these days. I was trying to show the simple and efficient strategy in which these gender issues are rooted: the underlying pattern of devaluation of feminine principle by demotion from Heaven to Earth that Christianity has done.

This demotion is not so obvious these days. Women have all the same rights as men. They have the right to dress like men, think like men, act like men, to become practically men. And if they do so, they can now indeed rise to positions of power unattainable to women throughout history.

Some of them can. But does it mean that the feminine principle was raised to a higher position? Are there respected feminine roles one aspires to take? Do we have images of feminine power equal to Athena, Hera, Demeter, Artemis? Are there any ritualized acts equal to Eleusinian mysteries devoted to Demeter, in which men and women celebrated the feminine, and of which Cicero writes:

“For among the many excellent and indeed divine institutions which your Athens has brought forth and contributed to human life, none, in my opinion, is better than those mysteries. For by their means we have been brought out of our barbarous and savage mode of life and educated and refined to state of civilization; and as the rites are called “initiations”, so in very truth we have learned from them the beginnings of life, and have gained power not only to live happily, but also to die with a better hope.” Cicero, Laws II, xiv, 36

As far as the popular, most widespread imagery – as seen in commercials, the Biblia Pauperum of today, conveying values, lifestyles, aspirations – is concerned, the Theotokos is still the only role women really aspire to. Only the styling (should I say iconography?) has changed.

The well dressed and groomed, probably well educated, active-looking yang woman in this commercial is one of the most apparent examples: baby in one hand, holding a bag filled with necessities related to the maintenance of material aspects of life in the other. She is obviously completely satisfied and fulfilled by the task of caring for flash and matter of her husband and child, impersonating the principle of Eros. Wrestling with abstractions, ideas and creativity in his course of work in domain of Logos, her husband is consumed in the immaterial to the level of losing contact with his own body and material environment, for which, of course, his wife is responsible, so she is taking care of refreshing Him. Since the matter is related to Earth, the most yin trigram and immaterial is related to Heaven, the most yang trigram, it is hexagram 12. Pi (Stagnation) again that comes to one’s mind, just as it does when looking at the icons in the first part of this article or in the spatial characteristics in the third part. 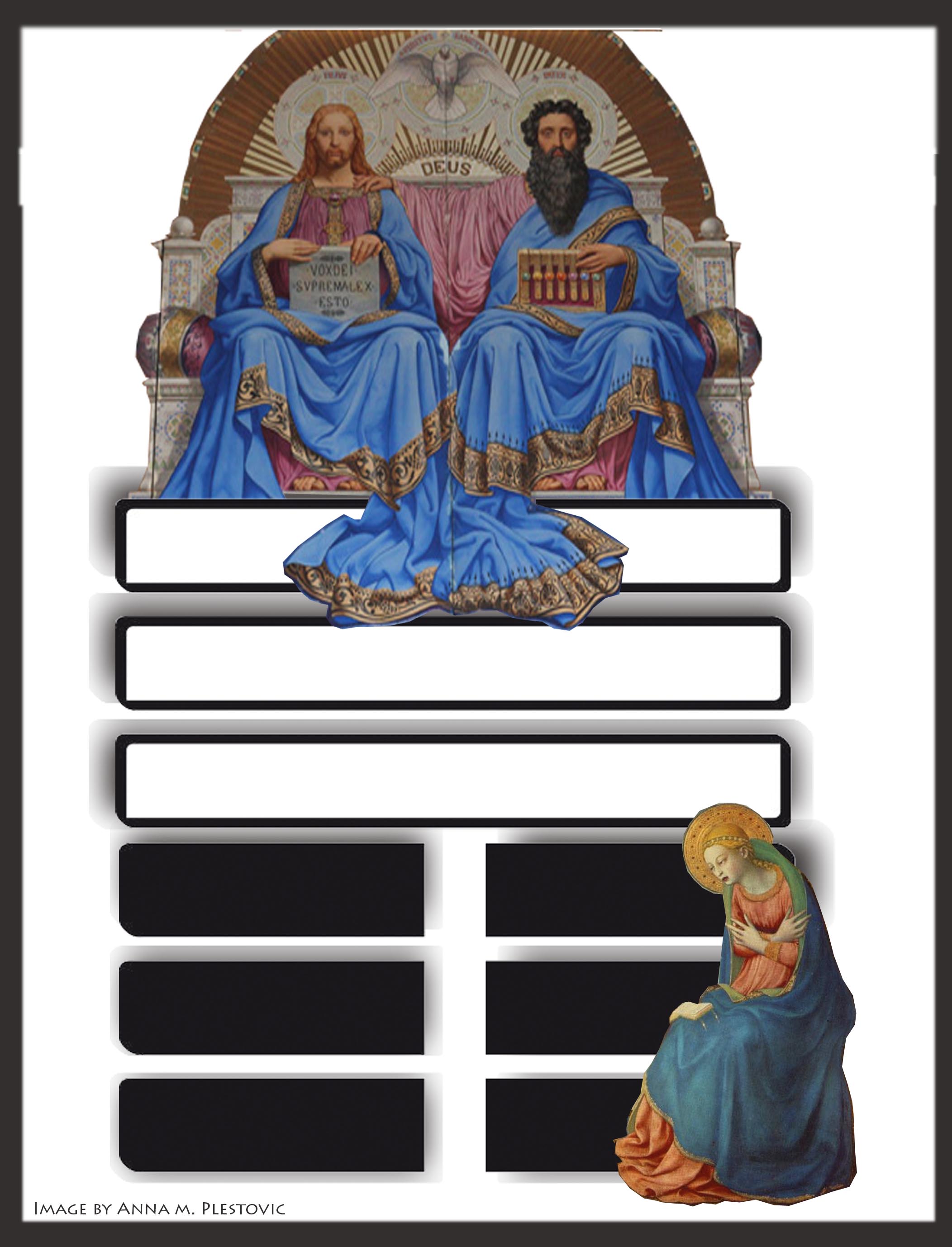 I admit, this particular commercial came to my mind because I see it about fifteen times every evening, and it is particularly annoying right now. But it could be any other commercial designed to target women, all of them based on image of ideal woman as the home-oriented meek person, with no interests and sources of happiness but to serve and to mitigate the faults of which she has so many. This funny resume of the commercials targeting gender roles pins it quite well.

In spatial domain in which I have compared Acropolis and Meteora monasteries, I should say there is Meteora reproduced again and again in cityscapes competing to come closer to Heaven, further from Earth, creating artificial, controlled environments free from whims and caprices of nature (feminine), celebrating Logos, and excluding Eros. So far I could not find anything contemporary to match the iconic value of skyscrapers that even remotely resembles the Acropolis in its symbolic power of elevating Eros.

The Ancient Greek goddesses cannot be revived. Maybe they should not be. But the world needs the balance, as it is now in grip of constant fear of destruction, dreading the Logos that can show itself as Thanatos in any moment in constantly increasing number of ways. A NASA-founded study predicts the soon end of our industrial civilization based on the way we treat our “resources”. The study unknowingly speaks about the same thing: the relation of Logos, yang creative principle and Eros, the yin principle of life and nature. But does it only in terms of Logos – rational, analytical, budgeting – while the beliefs, underlying values and causes of these behavioral patterns of society are not questioned.

To avoid destruction, which is the inevitable result of overly exaggerated yang and to establish balance, the power of Eros in heavenly domain should be restored. And to be efficient and long-lasting, the restoration of Eros should be done on a deep, mythological/religious level, on the level where it was demoted. Maybe the Christian churches should consider to deify Hypatia. Maybe it is time for finding new-old scriptures about female saints taming dragons, which would be the opposite but not less heroic act as slaying them (which is what male saints do).