Now we have come to the part about what was it that made me feel like I did while standing at Meteora and at the Acropolis? One can assume it was the “spirit” of the two places, but by that nothing is really explained. That spirit, the genius loci, however complex it might be, is not a mystical power that exists by itself. It is born from interactions of space, time and society, and can be understood through analyzing the relations of these aspects.

In previous posts I have written about the values of two cultures that have shaped the genius loci of these places and the related imageries, and later on I interpreted the symbolic meaning of these imageries, the relative positions, the “spatial” relations of feminine and masculine principles in two cultures embodied in the two sacred places, describing the underlying patterns, through the symbols of the I Ching. These previous posts were about the appearance of a specific spatial strategy – the appreciation and depreciation of feminine principle by placing it “high” or “low” – in the immaterial domains of society and patterns of change in time. Now I would like to share the discovery of how this immaterial domains shape the material world, or how this spatial strategy appears in the real spatial dimension.

”Even the life and beauty of the most awe-inspiring great religious buildings came from the language their builders used." writes  Christopher Alexander in his great work Timeless Way of Building. So, let me show some of the words and sentences of Acropolis and the Meteora monasteries as I read them, as the words that express the relationships of feminine and masculine principles and create the specific genius loci of these two places. Of dimensions, styles, architectural elements and compositions many words have been written already. These are easy to find, so I will not repeat those. Here I would like to discuss the spatiality of the two places from the point of view of meanings and values materialized in spatial relations.

The first major spatial difference between these two sacred places can be found in their respective positions in relation to physical and social surroundings. Despite that both the Acropolis and Meteora are located on high places above plains – Acropolis on a rocky outcrop about 150 m high, and the Meteora monasteries on natural sandstone rock pillars with average elevation 313 m – their positions in relation to the surroundings are quite different.

The Acropolis stands in the middle of Athens, as it did from the ancient days of the city, marking and forming the city center along with 4 other hills. This group of hills is also in center of the central plain of Attica (Athens Basin or Attica Basin), bounded by four large mountains.

The spot is a place of worship and the natural center of the community, of the human settlement organized around it from Paleolithic times (6th millennium BC) as some suggest, but it is pretty sure that it was a central sacred spot from Mycenaean times (ca. 1600–1100 BC). And it seems that it was dedicated to the goddess protecting the city ever since the beginnings. The central high position of this spot linked to the adoration of a female deity in relation to the patriarchal society of the settlement surrounding the spot evokes the image of hexagram 11. T’ai – the yin high grounds, the yang low and the feminine high, the masculine low – of the I Ching, as I wrote in previous post.

The Meteora Monasteries were also built on high rock pillars, but unlike the centrally positioned Acropolis, they are in a peripheral position at the northwestern edge of the Plain of Thessaly near the Pineios river and Pindus mountains. The monasteries on pillars stand on the edge of the town Kalabaka, far above the settlement, justifying their name Meteora, which means "suspended in the air" or "in the heavens above".

While the town is standing at the place of an ancient Greek settlement, Aiginion, the stone pillars outside the town were not serving any particular purpose for the human community in the vicinity until in 9th century AD, when the first monastic community was formed there. The monasteries were built mainly in 14th and 15th century, resulting in 24 monasteries, of which only 6 survived to our days. The peripheral position, the high standing of these monasteries and the exclusively masculine sphere of divine that is worshipped there, all point to the hexagram 12. Pi – yang high, yin low or masculine high, feminine low, no connection – as described in the previous post.

Another important difference would be the accessibility, as expressed by the entrance to the two places. The entrance to the Acropolis is the work of Mnesicles, the magnificent Propylaea, the culmination of the Sacred Way that led the Panathenaic procession from Eleusis (another sacred place of utmost importance dedicated to goddess Demeter) to the Acropolis. It is an essential, if not the most important factor of the “WOW” effect Acropolis had on me.

The gateway was designed to make that impression, to make clear that ascending the steps one is leaving behind the realm of men and seeking entrance to the land of gods. It is built to emphasize the difference between profane and holy space and to be a vehicle of spiritual transition from the secular to the sacred. It is a place of spiritual cleansing where the feeling of transformation is almost palpable. Standing at the bottom of the stairs the divine sparkle of every human being strives upwards, just like the ultimate yang trigram in hexagram 11. T’ai, and standing at the top one is overcome with the feeling of unity of things above and things below. It is the same feeling that appears in the imagery of ancient Greek goddesses, as shown in the previous posts.

In contrast, the access to Meteora monasteries was originally (and deliberately) difficult, requiring either long ladders lashed together or large nets to be used to haul up both goods and people arriving to the bottom of the rock pillars through steep and narrow paths. To enter a monastery required quite a leap of faith – the ropes were replaced, so the story goes, only "when the Lord let them break". This way of entering a place was not particularly inviting, in fact, it is more about isolation than ascension. 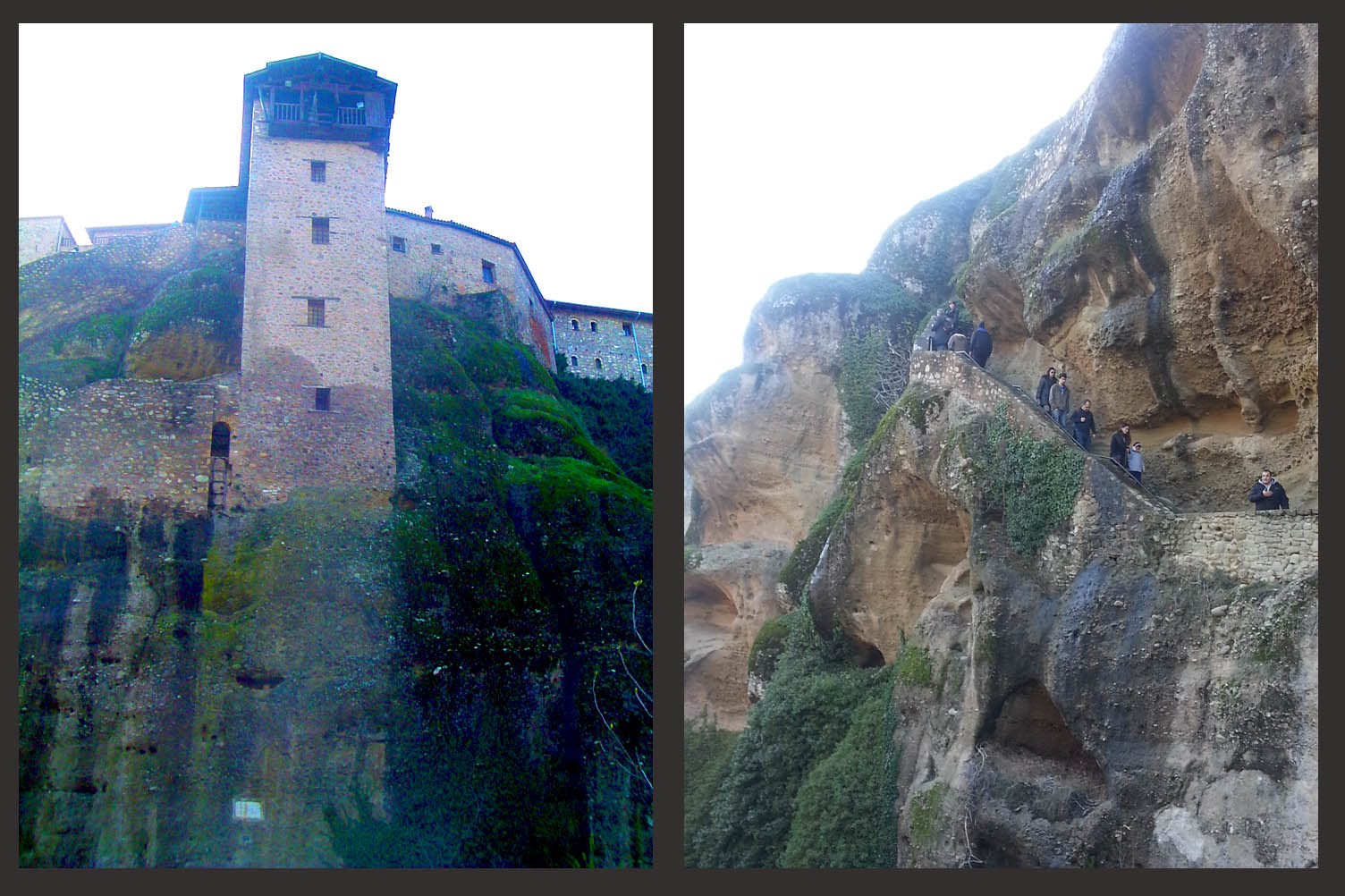 In the 1920s there was an improvement in the arrangements. Steps were cut into the rock, making the complex accessible via a bridge from the nearby plateau. Still, these steps are very narrow, leading through dark tunnels and under flanking rock outcrops, conditioning the one climbing to bend down, to nuzzle against the high, overbearing wall.

Standing at the bottom of entrance to the Great Meteoron, the largest of monasteries it is not the call to join the celestial kingdom what one feels, looking up the entrance tower, it is rather the feeling of one’s own insignificance and being unwanted. Naturally, after such manner of entry, it is not the unity of all things one feels standing at the top.

From the isolated monastery virtually suspended in the air, the fertile plain down below looks very far, low, unimportant, very earth- and flesh-bound compared to the prowess of spiritual accomplishment of the ones leaving the material world behind to live halfway to Heaven. That is what the visitors are supposed to feel standing so close to Heaven. That is to say, male visitors, who, unlike the female ones, are not expected to wrap themselves in black rugs (aprons) as ugly as can be found. The only reason for this aprons (that are compulsory for women even if otherwise covered up so that no flesh except for the face can be seen) I can imagine of, is to make women aware of being the lower, unworthy half of mankind, the half that should not be allowed so close to Heaven. This feeling of gender separation, and the strive to “leave behind the world of matter and flesh and join the sphere of spirit and heaven” which is implied by the manner of entrance to the monasteries suggests that the hexagram of I Ching to describe this setting is 12. Pi – yang, masculine on top and yin, feminine on bottom – in which no interaction between Heaven and Earth happens, as well as in the Christian imagery as I have analyzed in the previous posts.

To cut a very long story short, of other important differences I would mention only the one accentuated by the dispersion/concentration of objects, functions and meanings. Acropolis is a complex of many temples housing many gods, concentrated at a single plateau, while Meteora consists of monasteries worshipping one god, but placed each on its own inaccessible rock. 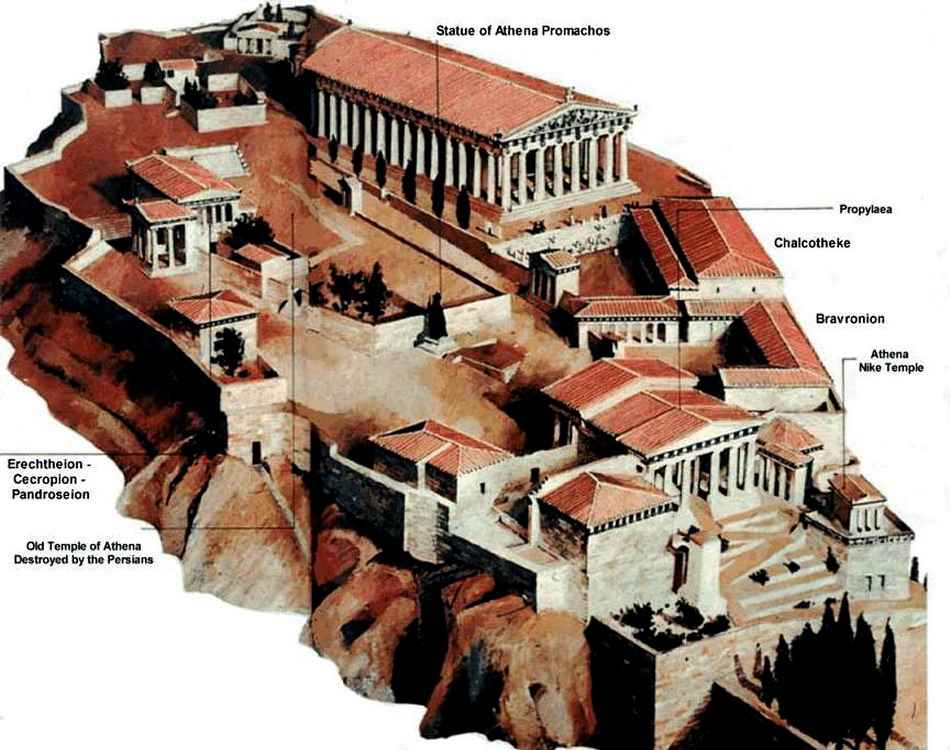 These arrangements point to the differences in functions and characters. At the Acropolis, in the center of human community where people come together, the gathering of divine powers is also represented by concentration of sacral objects. The human and the divine worlds meet there to celebrate their unity, the appearance of the heavenly patterns in every aspect of human existence. The spatial order implies the unity of the higher order with the material world.

Though praying to only one god, every monastery of Meteora is placed on the top of its own inaccessible rock pillar, preventing access to anyone from outside, and even to the monks of other monasteries of the complex. The monastic community is not only is isolated from the world below, but is divided within itself to micro-communities of monasteries secluded from each other.

By these characteristics, the place reminds more of a penitentiary, than of a place of celebration. Indeed, the place is defined by contrition; the very idea of monasticism is to repent for the sin of being separated from God by separating oneself from the world of His creation. Thus this spatial order points out that the divine and human domain are separated, alienated, the only possibility to re-establish unity with God is to renounce and punish the flesh, and with it the scorned, sinful material world – and, of course, women, who are considered the cause and source of the state of separation from God.

Showing the differences of imageries, symbolic values, spatial organizations and underlying patterns and values is a nice intellectual exercise, one might say, but what is the use of that in the contemporary world? Well, though our world seemingly is secularized, and the religious patterns of medieval Christianity appear to be non-existent, the very root of our culture is shaped by those patterns and even today those patterns appear to be quite vital, able to transform and adapt, ever recurring in the social processes. Some thoughts on that will be the topic of the concluding part of this series.